I've been busy in the studio this past month with co-producer Dan Whittemore, putting final touches on the Faith Healers new record, with a revised release date set for January. The album features 6 originals and 6 covers, including a deep groove version of Joe Sample's Put It Where You Want It and a soulful electric violin-based rendition of John Coltrane's Naima. We recorded a very swampy version of the Cajun/Creole standard Joe Blon; and pay tribute to Cesar Chavez with our version of Concion Misteca. The originals groove, rock and flow with strains of Zydeco, Tex-Mex, New Orleans and East Texas Soul. As guitarist Joe Jewell puts it, the common denominator in this band is "a very Muscle Shoals kind of sound."

The band and I were recently in the big ole back performance room at Griffith Park Recorders in Glendale, filming videos with director Ron Mulvihill. The first video, Muddy and the Devil, is posted here on this site, with more releases to follow. We are loving this band, the material, the music, and most significantly, playing with soulful energy, unwavering pocket and groove. I know we talk about pocket and groove incessantly, but as you listen to our music, you'll understand why.

More than anything, the Faith Healers want to earn your ears and appreciation. Take a listen, follow us and stay tuned. We won't disappoint, I guarantee. - Jim Shirey

Called by one music blogger "the best band you've never heard of" The Faith Healers play the music they love. Between the five core members there's over 150 years experience playing Jazz, Latin jazz, Gypsy Jazz, Blues, more Blues, Zydeco, Cajun, Funk, Rhythm and Blues, more Rhythm and Blues, Rock, more Rock, Pop, Folk and Country Rock. The Faith Healers' sound been referred to as "Muscle Shoals West". In the studio and on the road, members of the Faith healers have backed stars and difference makers in American Popular Music for the past four decades, with a heavy helping of groove and soul.. You may not recognize all the players, but you have, without a doubt, heard them.

Leader and founder Jim Shirey is a veteran producer, singer/songwriter and multi-instrumental session musician,  touring and recording on and off for the past 35+ years. Jim tends to hibernate in the studio, in the last few years producing records for UHF, The Hangan Brothers, Eagles songwriter Robb Strandlund, alt country star Kern Richards, alt folk stalwarts Squeakin' Wheels, and a number of other folks.

With co-producer Dan Whittemore, Jim has just completed the Healer's long overdue debut album, Jim Shirey and the Faith Healers, joined by veterans Homero Chavez, John Selk, Alex DelZoppo, Joe Jewell along with Elizabeth Selk on backing vocals.  The Faith Healers are now out of the studio, taking it live with a soulful mix of Blues, Jazz, Tejano, Cajun and East Texas/Louisiana R&B.

Get ready for the Healing... 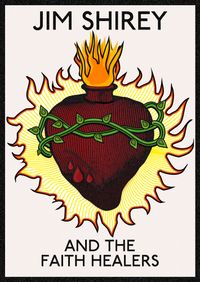 An Evening With The Blues

Benefit Concert featuring Jim Shirey and the Faith Healers and JR Snow and the Regulators. Proceeds go the the Mustaler family, recent victims of a series of tragic losses.

No cover! Rare local performance! Be there or be square! White bucks only, no slacks or capris please.

Share
View on Google Maps
FAITH HEALERS FIRST VIDEO - MUDDY AND THE DEVIL
The Faith Healers are pleased to post our first video - Muddy and the Devil; filmed and directed by Ron Mulvihill. You will find it right here on this site, just click the music/videos bar on the site menu. We hope you thoroughly enjoy it! Let us know what you think.

Muddy and the Devil - written by Jim Shirey and Rick Smith, BMI. All rights Reserved